As the Memorial Day for victims of political repression, annually observed on May 31, approaches, Dosym Satpayev’s Foundation has published Sarah Cameron’s book on the famine and repressions of the 1930s, “The Hungry Steppe: Famine, Violence, and the Making of Soviet Kazakhstan,” in Kazakh. Political scientist and publisher Satpayev shared with Adamdar/CA reflections on the publication of “The Hungry Steppe” in Kazakhstan, the great famine and genocide of 1930s, the scars of a post-traumatic society and historical memory.

Upon hearing a presentation in the United States in early January 2019 about Sarah Cameron’s book: “The Hungry Steppe: Famine, Violence, and the Making of Soviet Kazakhstan,” I immediately invited Cameron and her publisher, Cornell University Press, to publish this book in Kazakhstan in Kazakh as part of our literary project “Sóz”. My private cultural and educational foundation was ready to take on all the costs of translating and publishing the book. I was very glad that Cameron and her publisher supported this idea, and there are several reasons why it was important for us to complete this project. 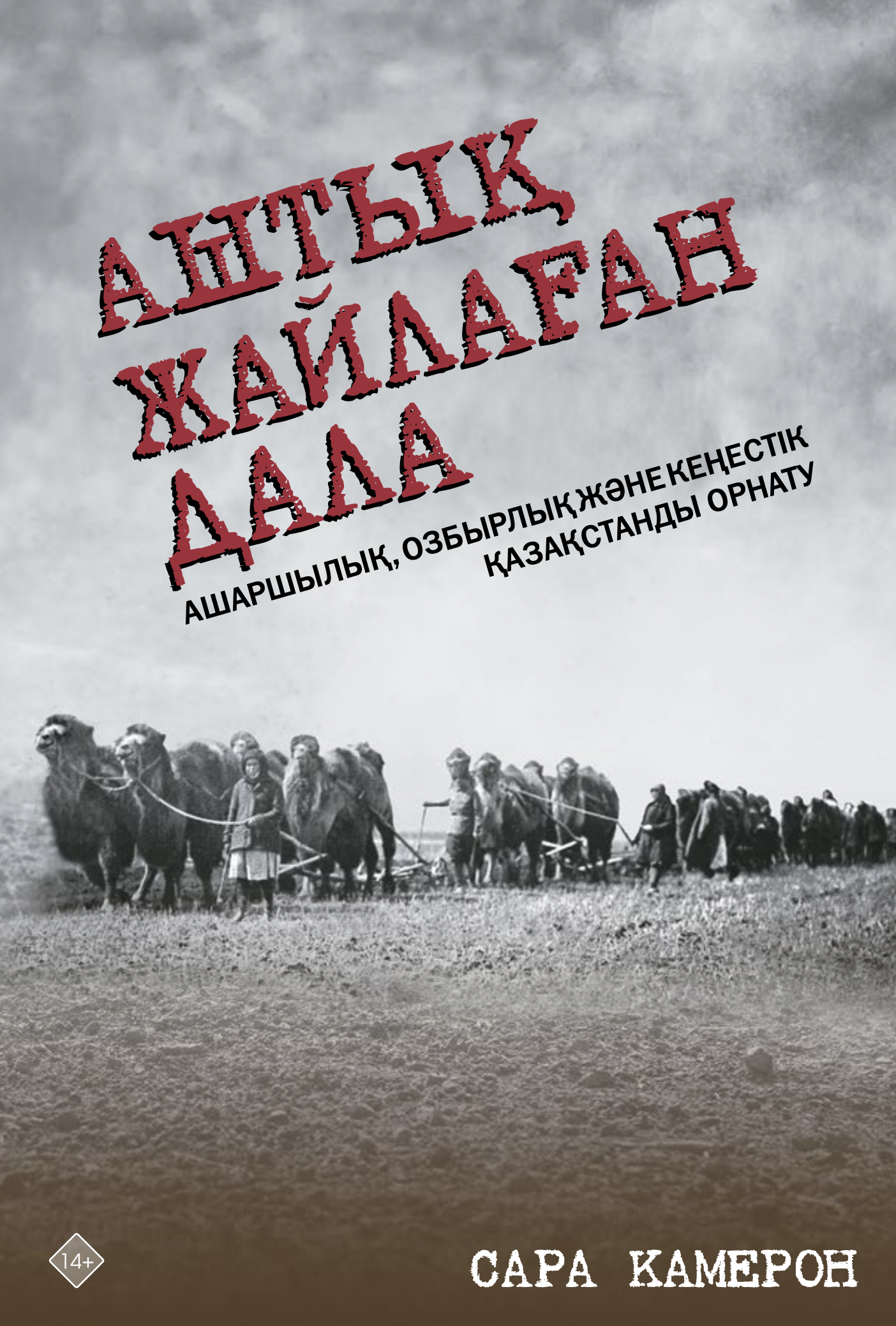 Firstly, we are still a post-traumatic society. Bit by bit, we are still restoring our historical memory, our roots and traditions. It is vitally important to make sure young people do not forget about the most tragic chapters in the history of the Kazakh people. This is all the more critical against the backdrop of dangerous and alarming trends, such as the active heroization and popularization of Stalin’s personality by Russia’s propaganda apparatuses. Various sociological surveys have revealed that Stalin is the most popular historical figure in Russia today. This is also the result of a deliberate attempt to downplay the scale of political repression and to turn a blind eye to the catastrophes associated with the famines in Kazakhstan, Ukraine and other parts of the Soviet Union. Authorities’ ideologues continue to rewrite history. Already, many young people know nothing about the Stalinist repressions. They do not know about the Gulag, Karlag, or ALZHIR (Akmola Camp of Wives of Traitors to the Motherland). Moreover, they know little about the asharshylyq* (the Kazakh famine of 1930–1933). But we must constantly keep these events in our conversations, continue to write books and scientific articles, conduct historical research, hold conferences, and make films. We consider Sarah Cameron’s book, published in Kazakh as “Ashtyq jaılaǵan dala. Asharshylyq, ozbyrlyq jáne Keńestіk Qazaqstandy ornatý” as an attempt to uncover the truth, which is still hidden from us by the ideological dust of the past and the political situation of the present. Moreover, the importance of this research lies in the fact that Cameron not only learned the Kazakh language to better understand the history of the people about whom she writes, but also that she looked at this topic objectively as a scientist, and recognized the Kazakh famine as one of the great tragedies of the twentieth century based on the facts that she uncovered. Indeed, in her opinion, the “scars” left by the famine haunted the republic throughout the entire subsequent Soviet era and influenced the transformation of the Kazakhs into a modern nation in 1991.

We are still a post-traumatic society

Secondly, in October 2018, the U.S. Senate adopted a resolution honoring the 85th anniversary of the Ukrainian famine of 1932-1933. But in this resolution, nothing was said about the famine in Kazakhstan of the ‘30s. The world knows little to nothing about the Kazakh tragedy, and its causes and consequences are often incorrectly assessed. It is likely that Sarah Cameron is the only Western historian who has publicly stated that Kazakhstan’s famine should also be remembered in the halls of the United States Congress, since by some measures this hunger had even worse consequences than Ukraine’s.

Thirdly, the publication of this book is our second major historical project on the asharshylyq. The first project was a documentary: “Nomads of the Dead Steppe”, which we posted on YouTube last year, primarily for young people. It is important for us to convey the importance of this topic, not only for society, but also for the Kazakh authorities. Indeed, the very fact that the world knows more about the Ukrainian famine and knows very little about the Kazakh asharshylyq is due to the fact that in Kazakhstan, the authorities did not dare to recognize the mass hunger on the Kazakh steppe in the ‘30s as genocide, which is what it was. The 1948 Convention on the Prevention and Punishment of the Crime of Genocide states that one definition of genocide is “...the deliberate implementation of measures making death inevitable due to various circumstances (such as prohibition of engaging in activities that are the main source of subsistence for a group of people...)”. It was Filipp Goloshchyokin, with Moscow’s support, who masterminded the genocide of the Kazakhs during the famine of 1930-33 (also called “Small October”) with his slogan “Settlement on the foundation of complete collectivization.” He created the conditions for hunger to flare up on the steppe, nearly ruining the entire nation by forcing collectivization. Nomadic cattle breeding, as well as grain production, was forcibly transferred to collective farms. This caused the Kazakhs to lose the opportunity to engage in activities that were the main source of their subsistence. The author of the Convention on Genocide, Rafael Lemkin, also understood this terrible phenomenon as cultural destruction. This includes the destruction of the Kazakh intelligentsia during the repressions and the physical death of many carriers of the Kazakh nomadic culture and traditions during the famine, which left deep scars on the Kazakh national consciousness.

In Kazakhstan, the authorities did not dare to recognize the mass hunger on the Kazakh steppe in the ‘30s as genocide

In this regard, through the film and the book, we would also like to address President Kassym-Zhomart Tokaev, so that he may know and speak the truth and recognize the tragedy, doing what his predecessor did not. First, recognize the asharshylyq as genocide. Secondly, at the state level, with the participation of historians, begin work on the creation of a National Database of Famine Victims. I think that in Kazakhstan there are still many families who preserve the memories of their dead ancestors. We must bring all these memories together while their guardians are still alive. Thirdly, on Memorial Day for victims of political repression and hunger, every year we should declare a moment of silence throughout the country, in memory of the millions who perished, victims of “one system, one regime.” This moment of silence is only a small part of what we can do to make up for decades of neglect.

* The famine of 1931−1933 (“Asharshylyq,” “Uly Jut,” “Holodomor,” “Goloschyokin's famine”) — one of the major yet under-reported tragedies in the modern history. As a result of the policy of collectivization, seizure of the major sources of livelihood and repressions against peasants, nomadic cattle herders and the “kulaks” led by Bolsheviks under the command of Joseph Stalin, a number of regions of the USSR had been spanned by massive famine. The greatest level of casualties were in Kazakhstan and Ukraine, the famine was also spread in some areas in the republics of Central Asia, Siberia, Ural, Caucasus and the Volga region. Number of victims of the famine in Kazakhstan exceeded that of the Kazakhs who died during World War II by several times. The famine in Kazakhstan killed from 1 million to 3 million people.