On Friday, January 24, an appeal hearing was held in the Almaty City Court in the case of “Nur Otan v. Activists Alnur Ilyashev, Marat Turimbetov and Sanavar Zakirova”.

In April and then again in August 2019, activists sued the Almaty authorities and the ruling party of Kazakhstan, Nur Otan, for obstructing the creation of the Our Rights party, initiated by Zakirova and Turimbetov. The first deputy chairman of the party and former akim of the city of Almaty Baurzhan Baybek were named as co-defendants in the lawsuit, and the chairman of the party and first president of Kazakhstan, Nursultan Nazarbayev, as a third party. Alnur Ilyashev posted this information on his Facebook page.

The party, and then party members T. Shakirova, E. Medeuov, D. Akkulov and R. Bakhitbekova, who joined two days before the completion of the proceedings, countersued, accusing civil activists of encroaching on the “honor, dignity and the business reputation” of the Nur Otan party and demanding 20 million tenge in compensation for the “moral suffering” they endured. In November 2019, a court in the Zhetysu district of Almaty partially satisfied Nur Otan’s countersuit, obliging activists to pay more than 6 million tenge to the four plaintiffs.

Activists appealed to the Almaty city court. The hearing was scheduled for January 23, 2020. Despite increased public interest in this unprecedented for Kazakhstan case, the smallest room in the city court building was chosen for the meeting. In response to the indignation of the participants, the assembled activists, as well as the address of the human rights activist Marzhan Aspandiyarova to the court, it was decided to postpone the hearing until 16:00 the next day, January 24, and hold it in a larger assembly hall.

On January 23, activists gathered at the courthouse where the trial was to be held, assembling to support the defendants in the case. Controversy and debate erupted between some activists and supporters of Nur Otan.

On the appointed day, January 24, members of the Nur Otan party and its youth wing Zhas Otan, who had been called upon by the party, as well as employees of other state structures, had nearly filled the hall a few hours before the hearing was to start. Because of this, most activists who came to support the defendants were not allowed into the hall. 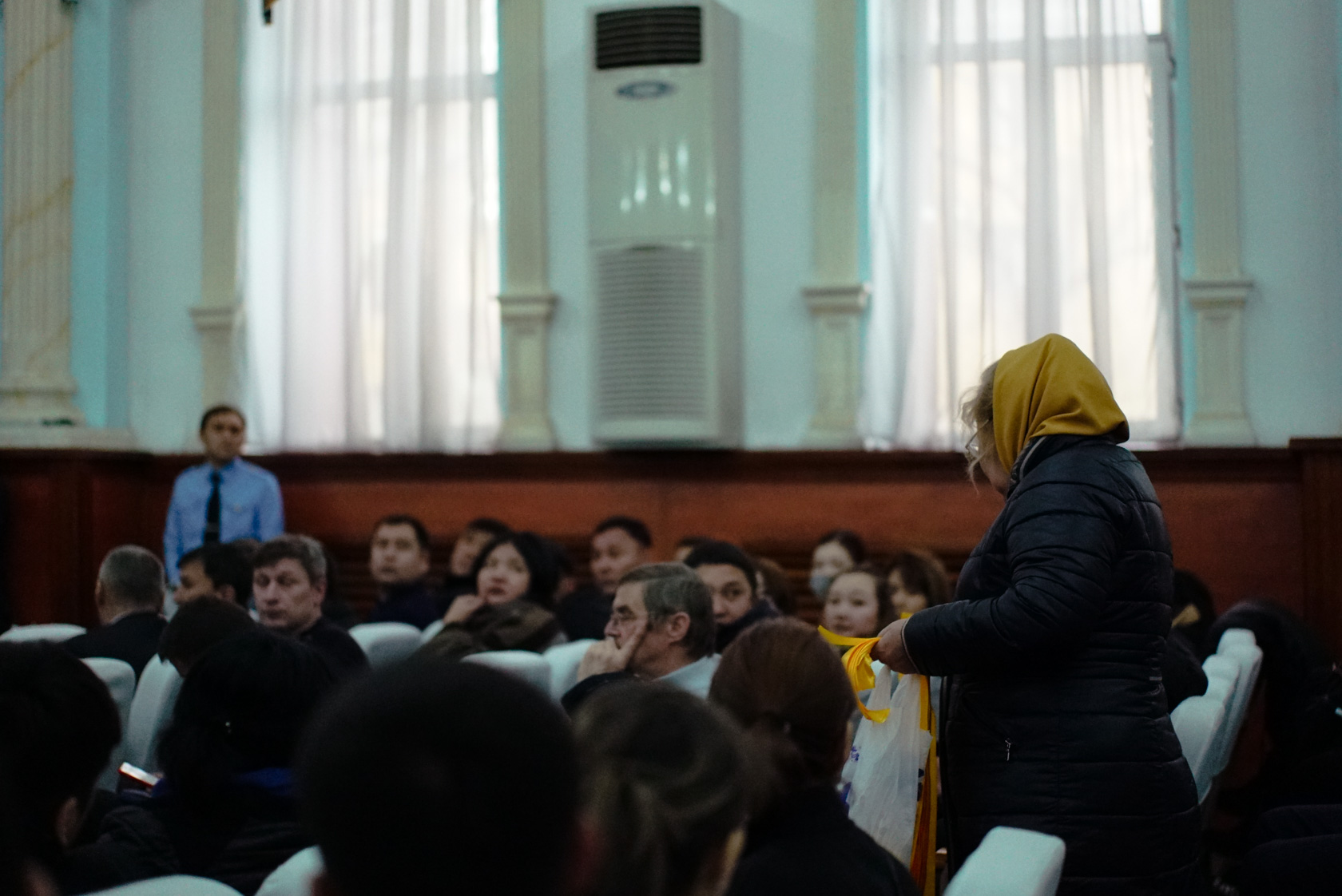 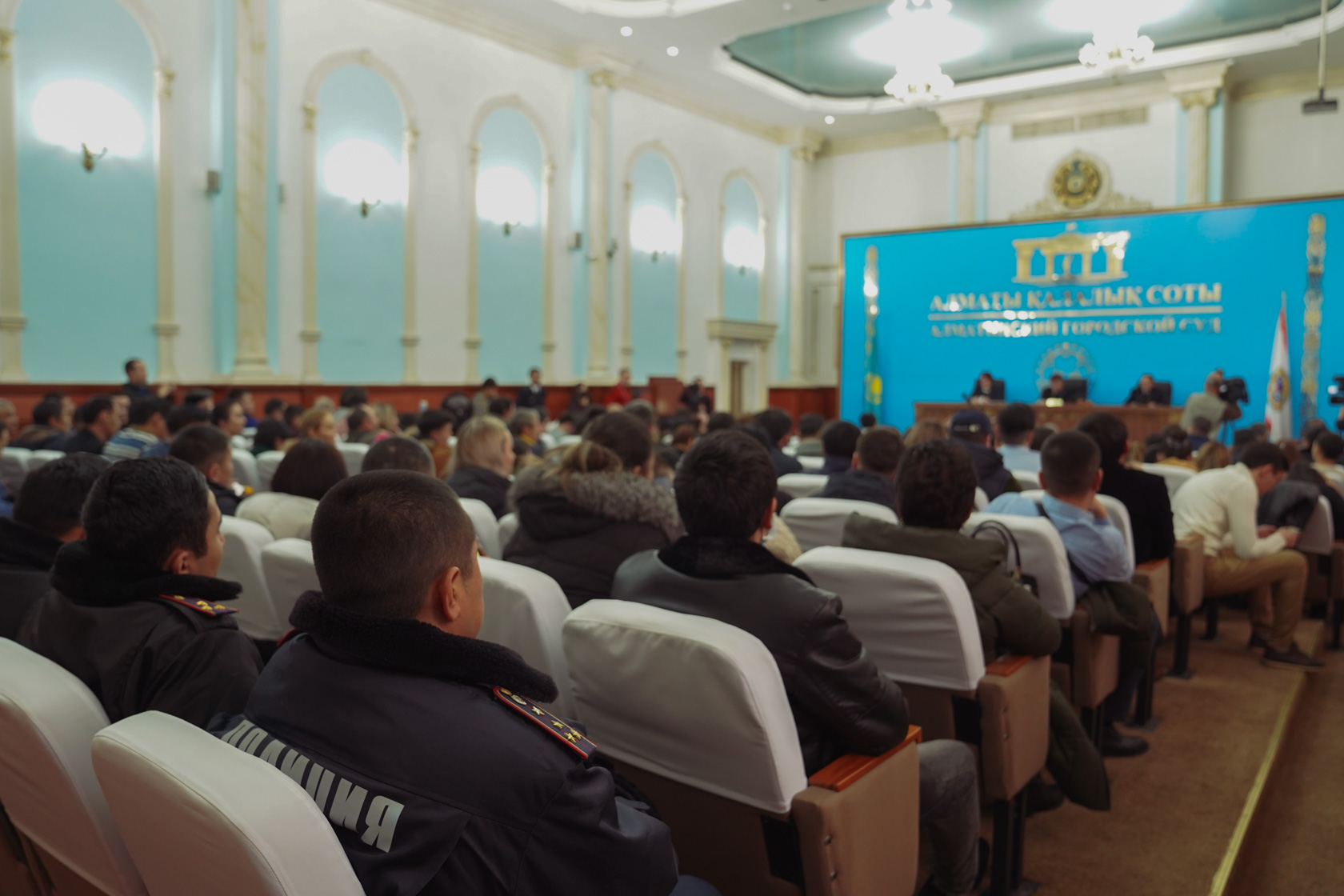 At 16:00 the judicial panel takes their places. The defendants and their representatives, who have long arrived in court, are still barred entry into the courtroom. The hearing begins after a delay.

Human rights activist Marzhan Aspandiyarova acts as a representative of the defendants.

While the hearing is in progress, you can hear numerous activists who were banned entry into the courtroom chanting: “Let us in!” from behind closed doors. 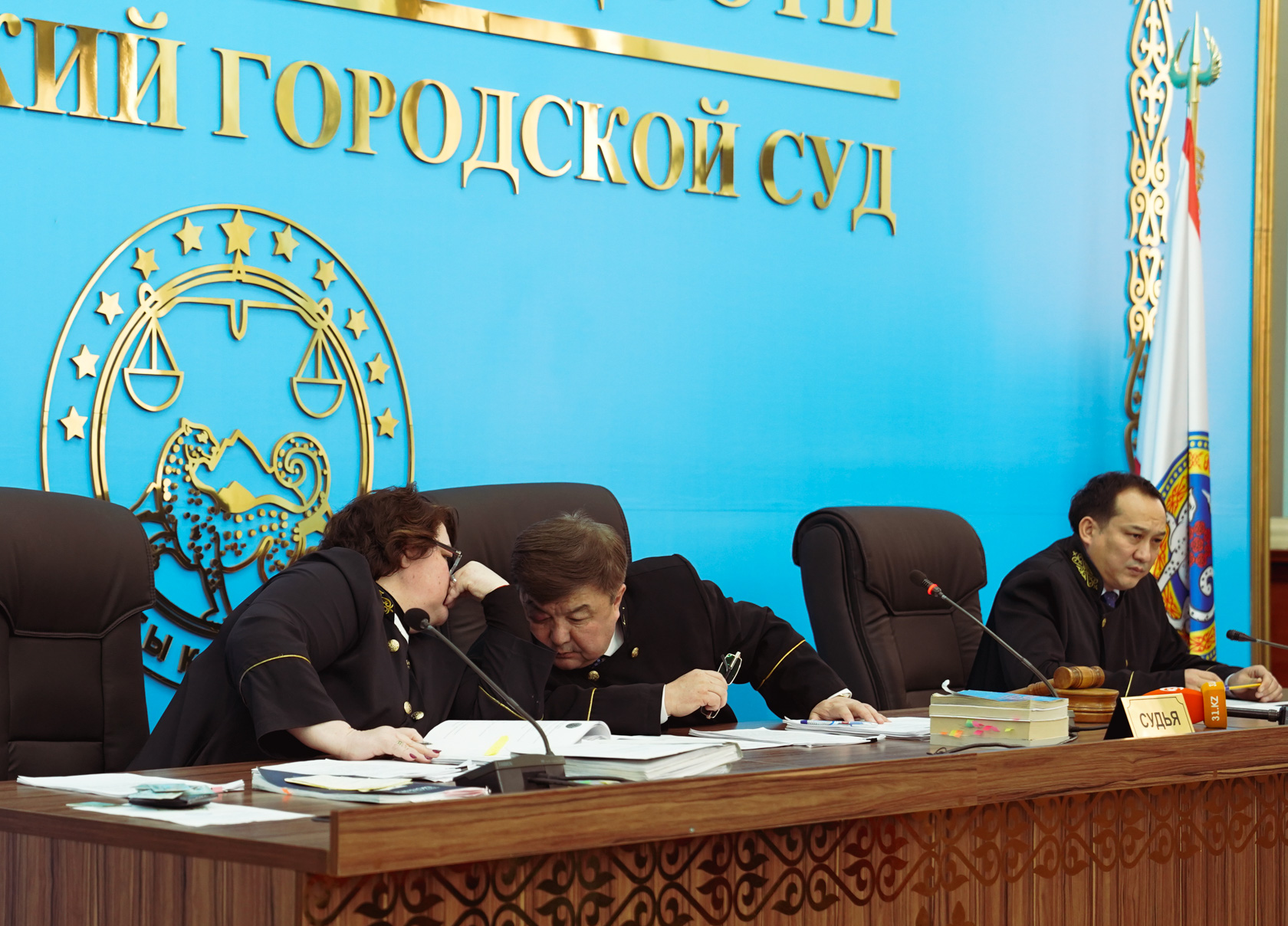 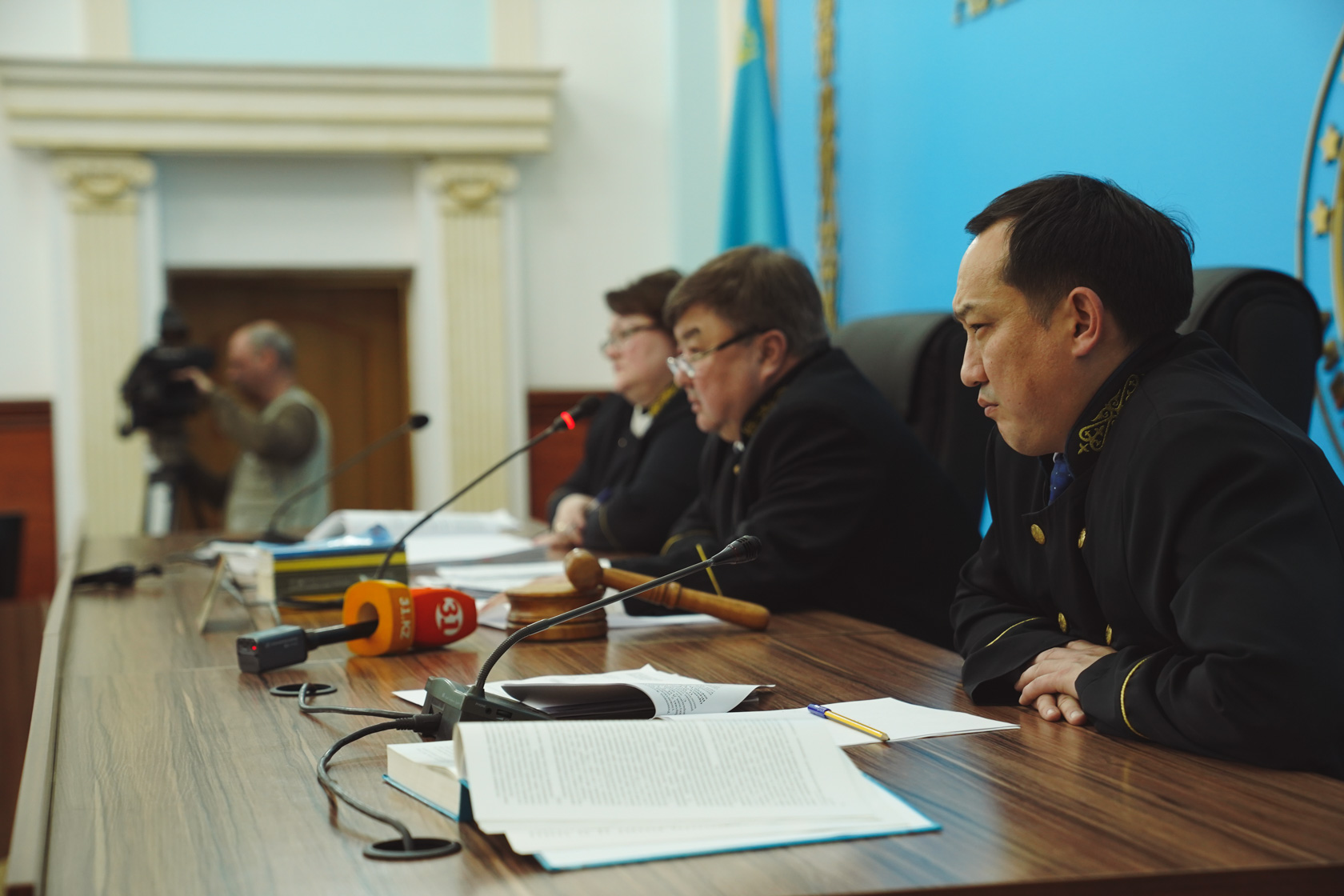 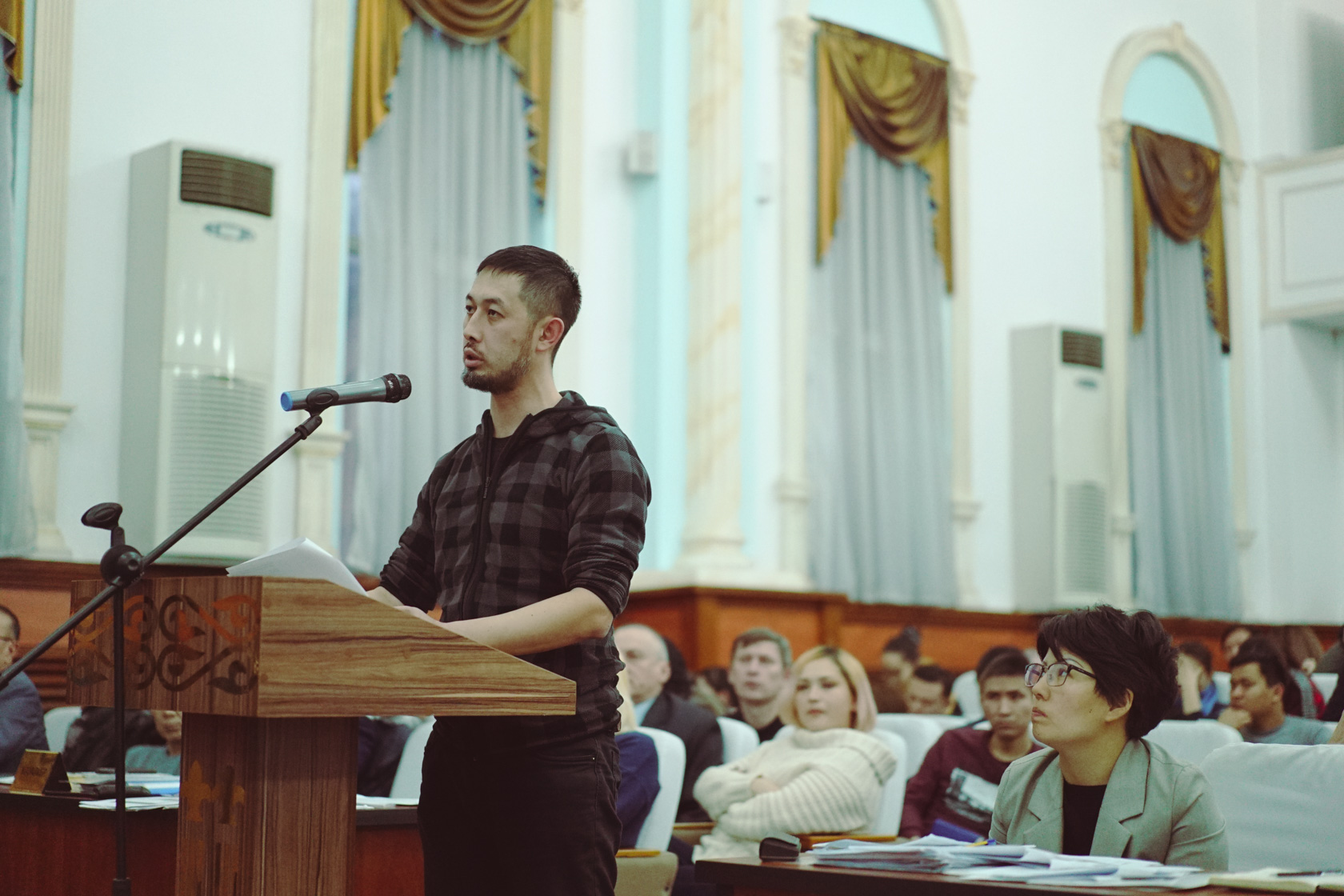 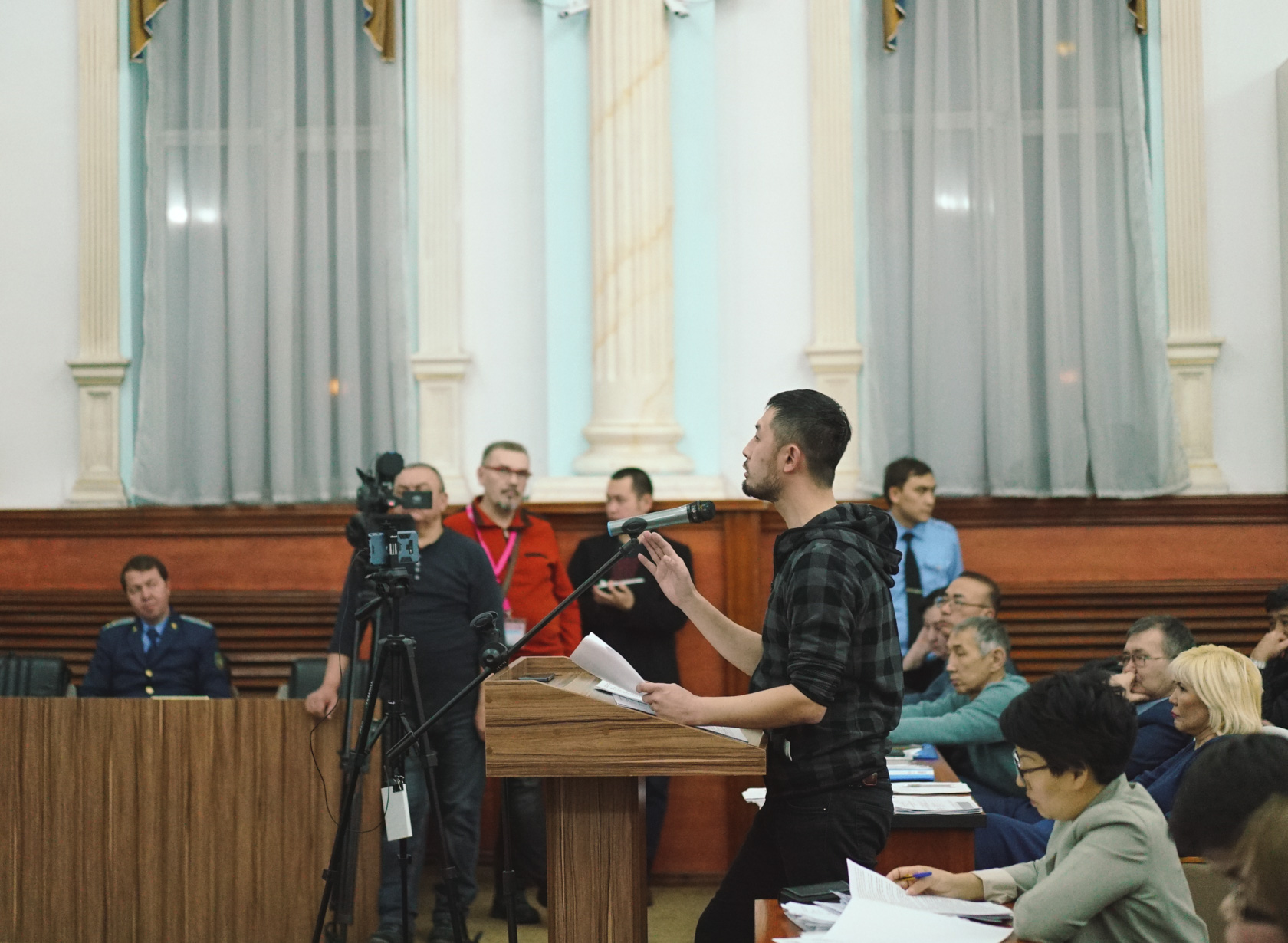 At the beginning of the hearing, the speeches of the process participants are accompanied by applause and comments by their supporters gathered in the hall. By order of the judge, activist Asya Tulesova is taken out of the hall. The bailiff and several men in barbaric uniforms drag the resisting activist from the room. 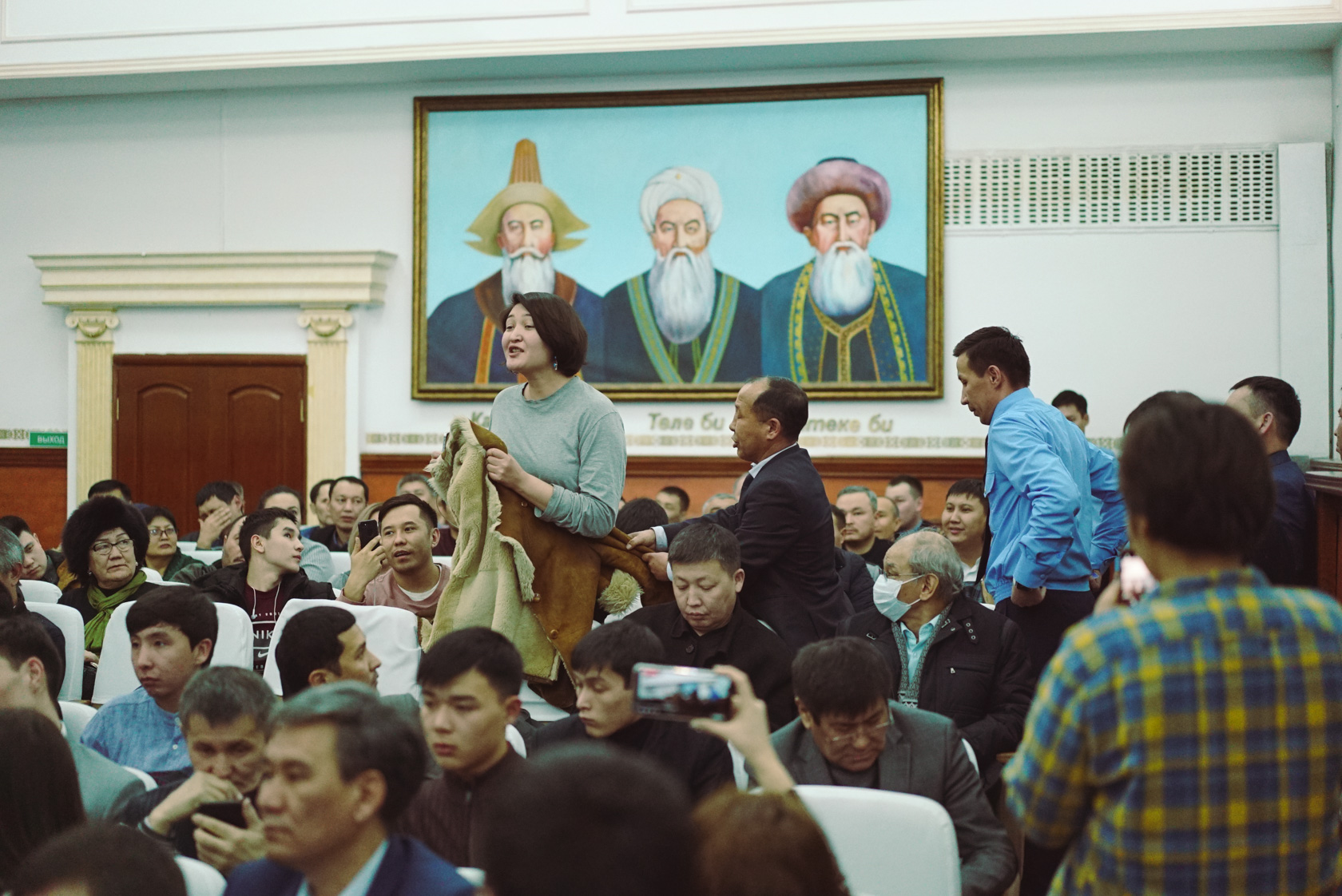 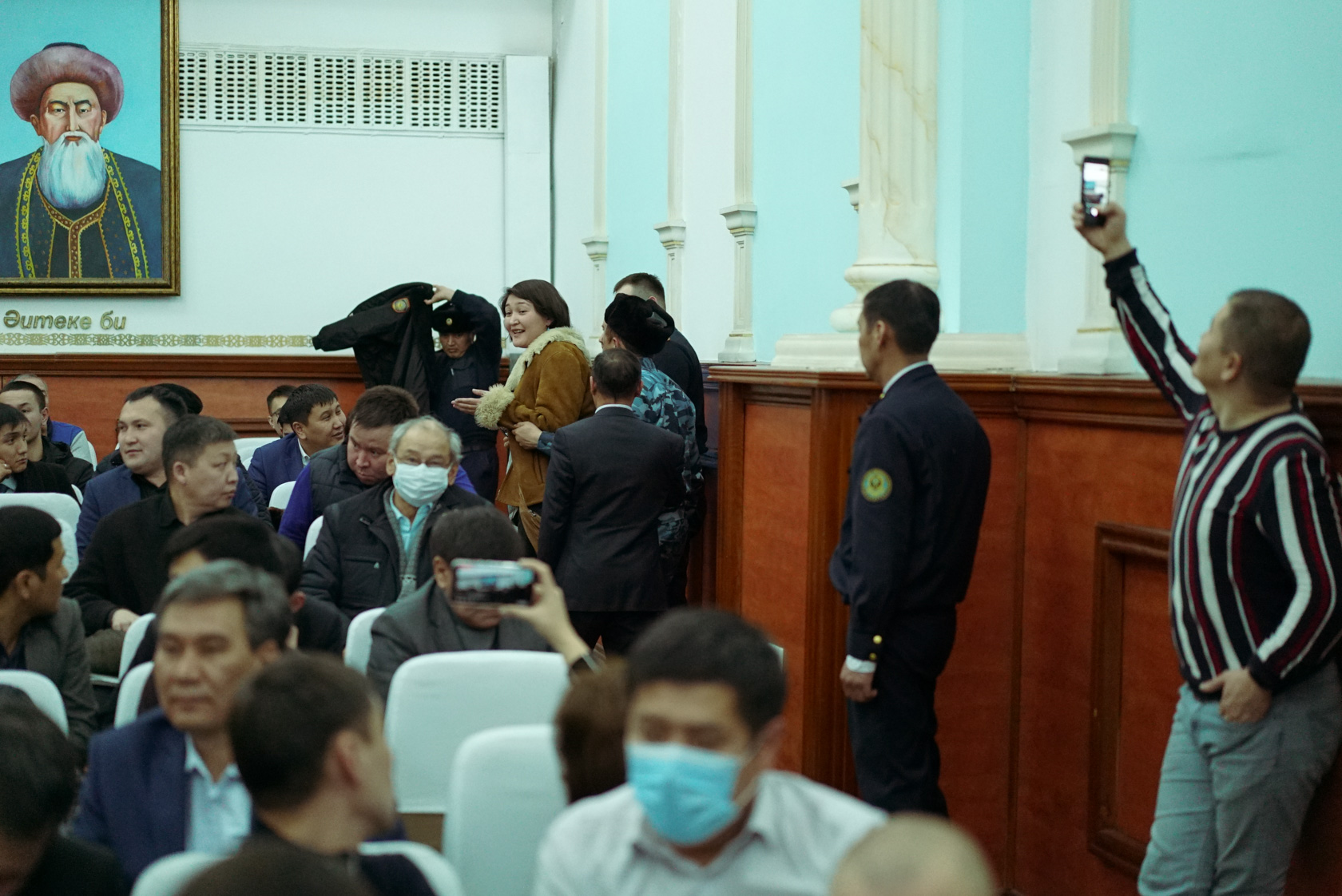 The trial lasts more than 3 hours. 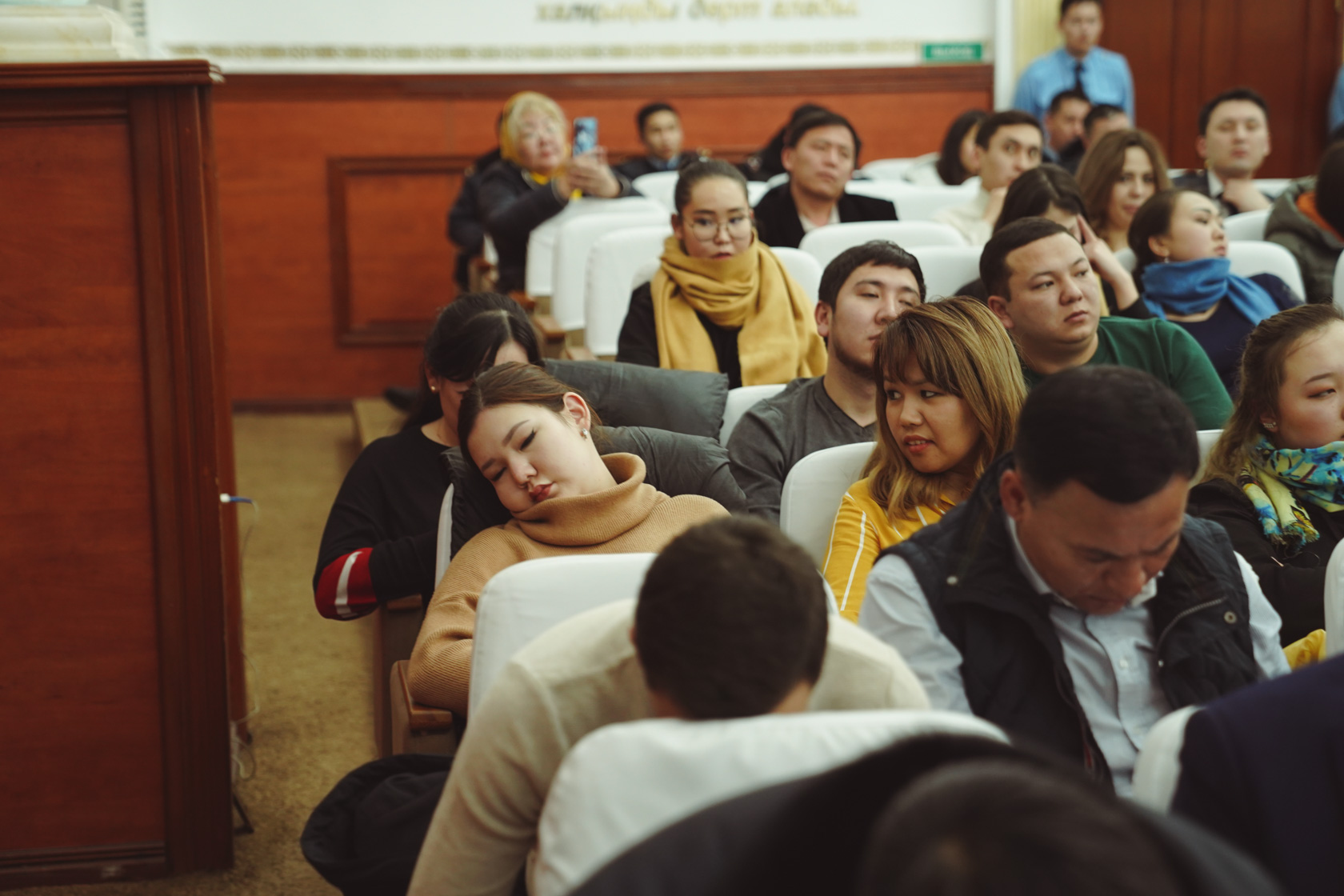 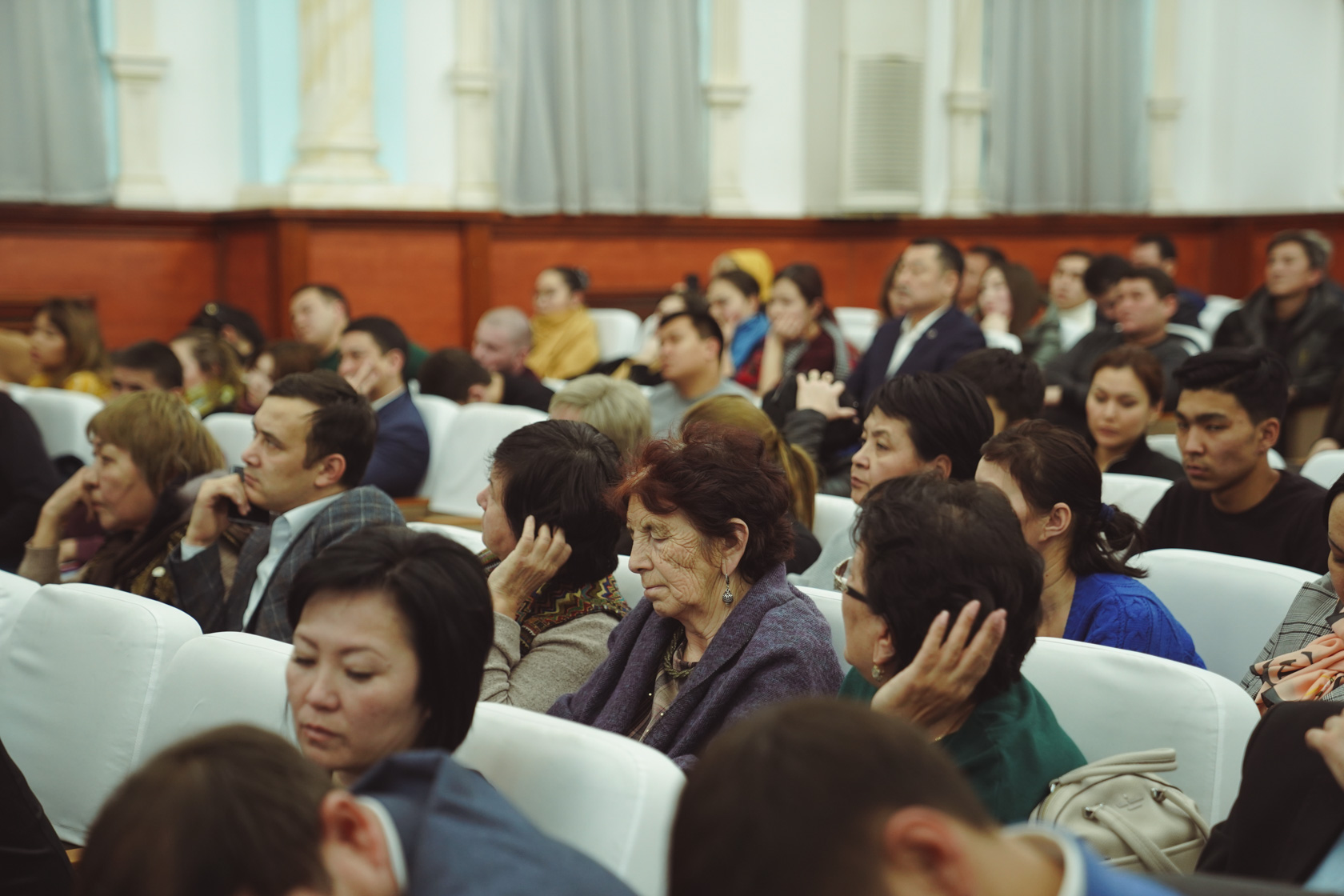 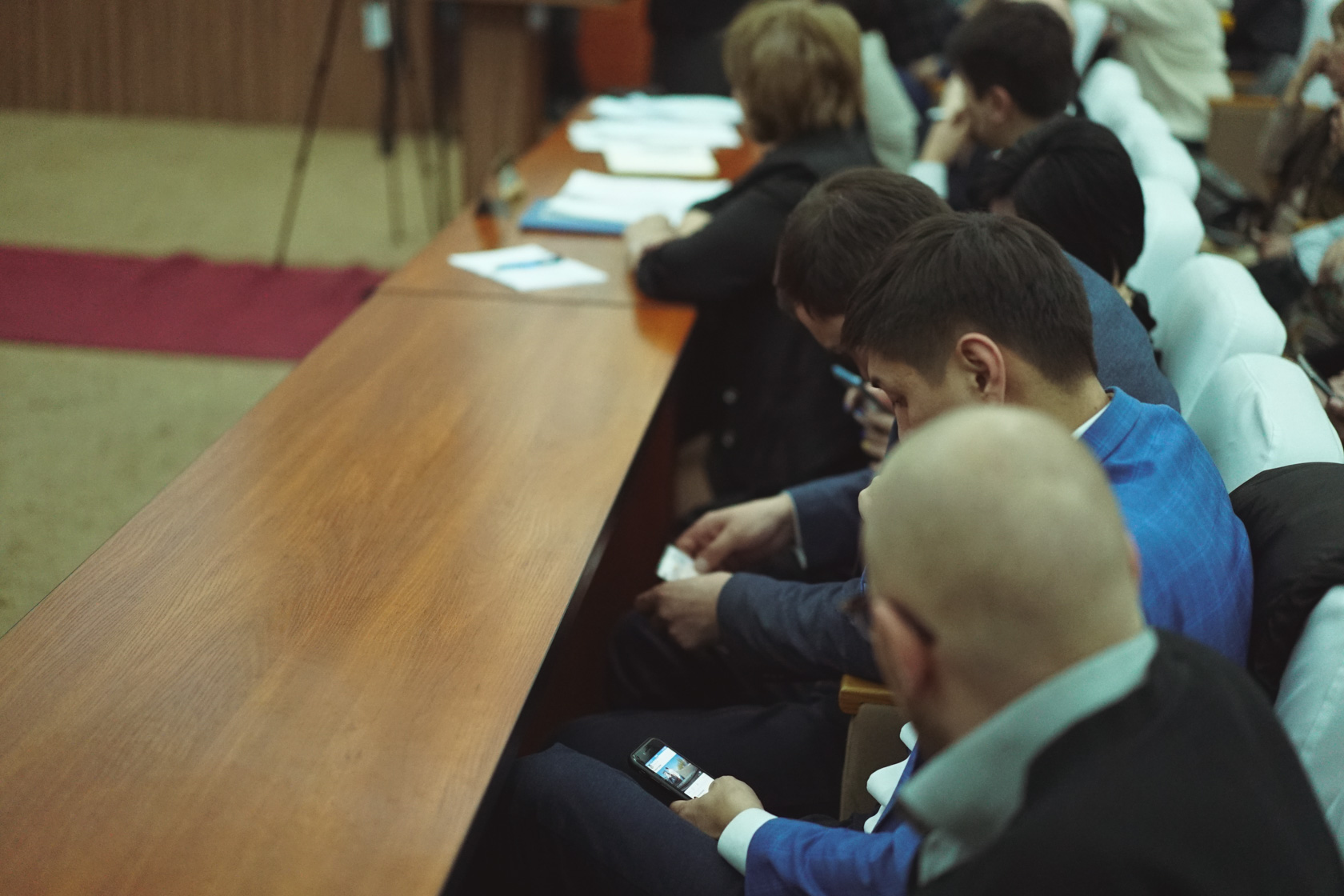 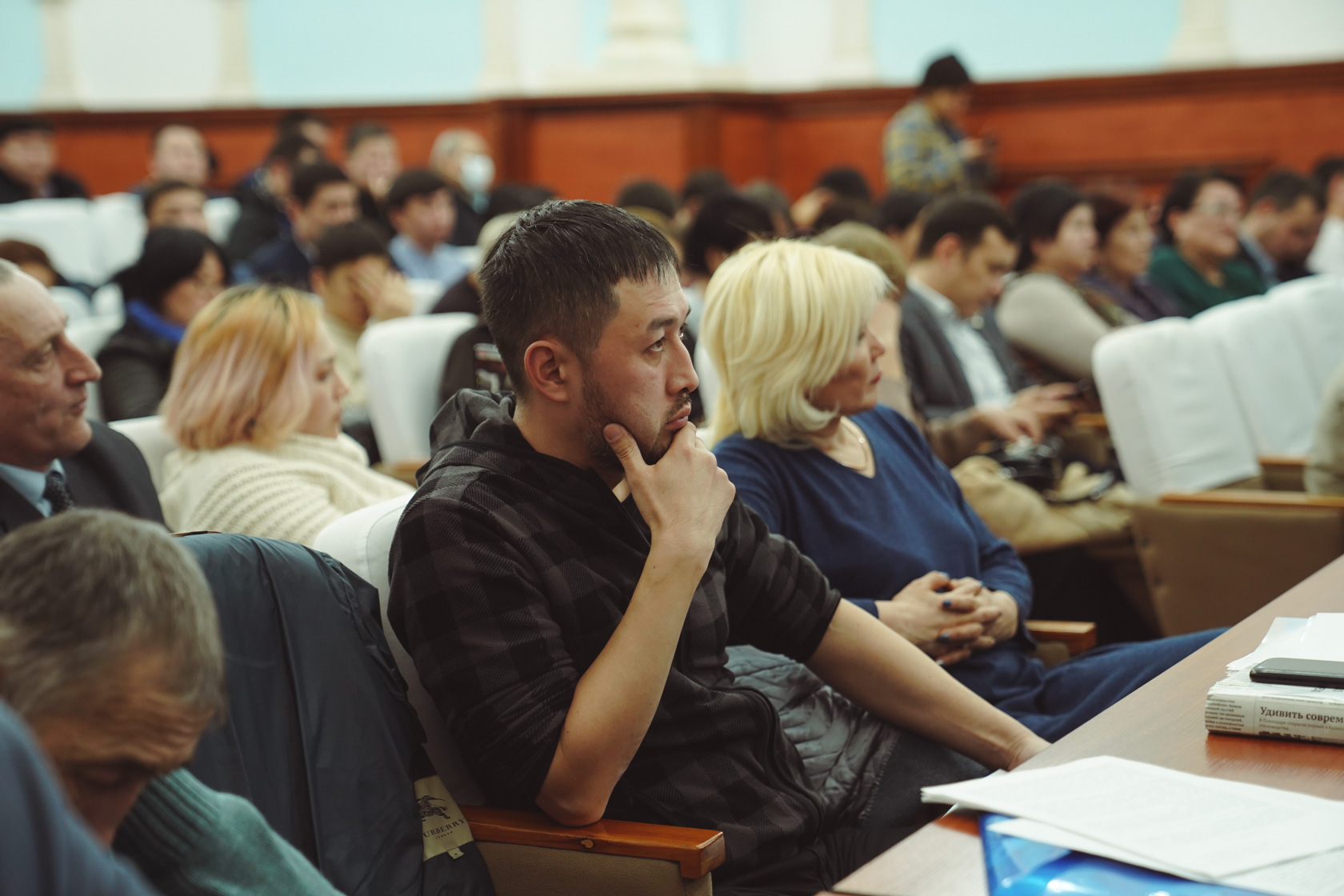 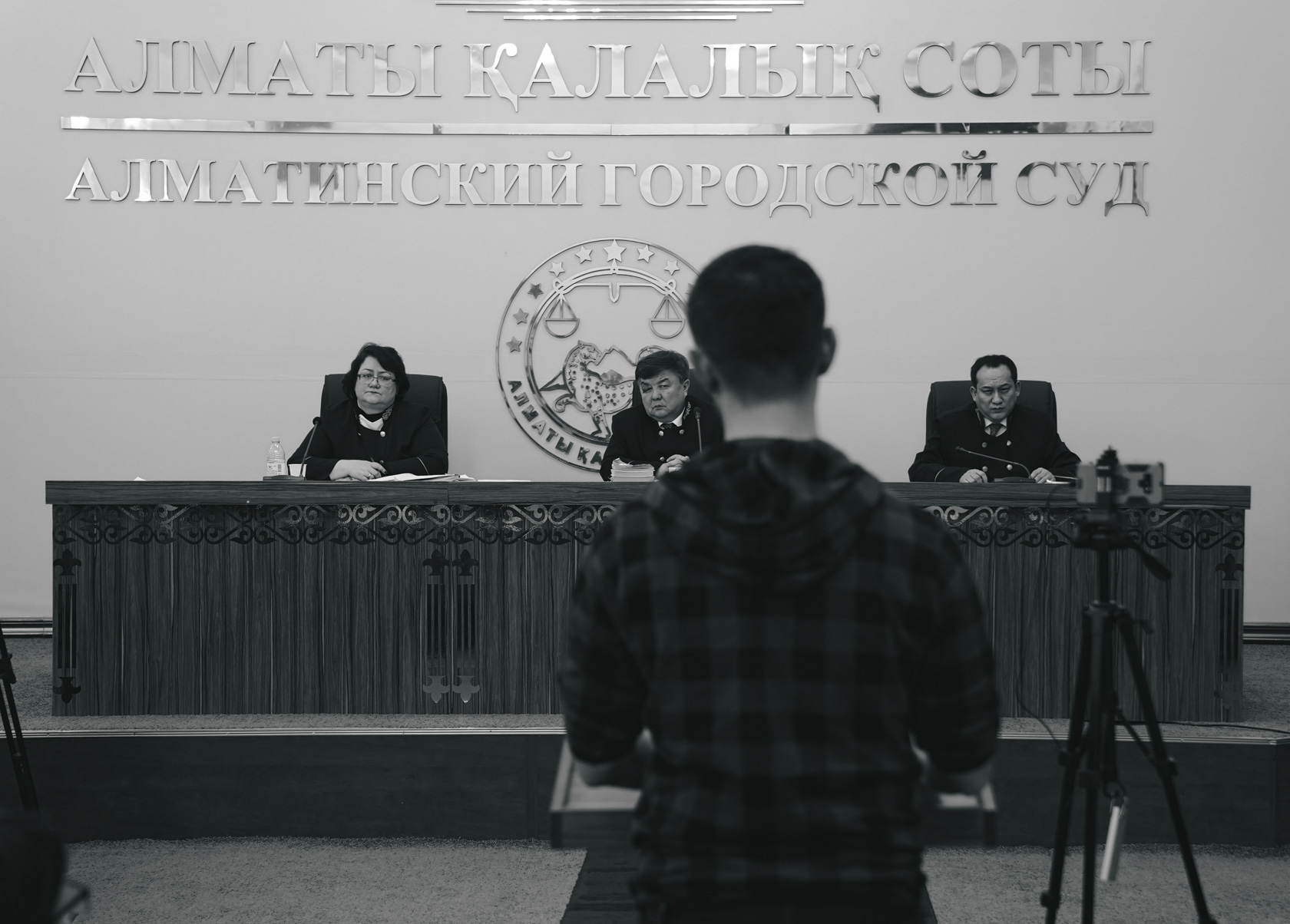 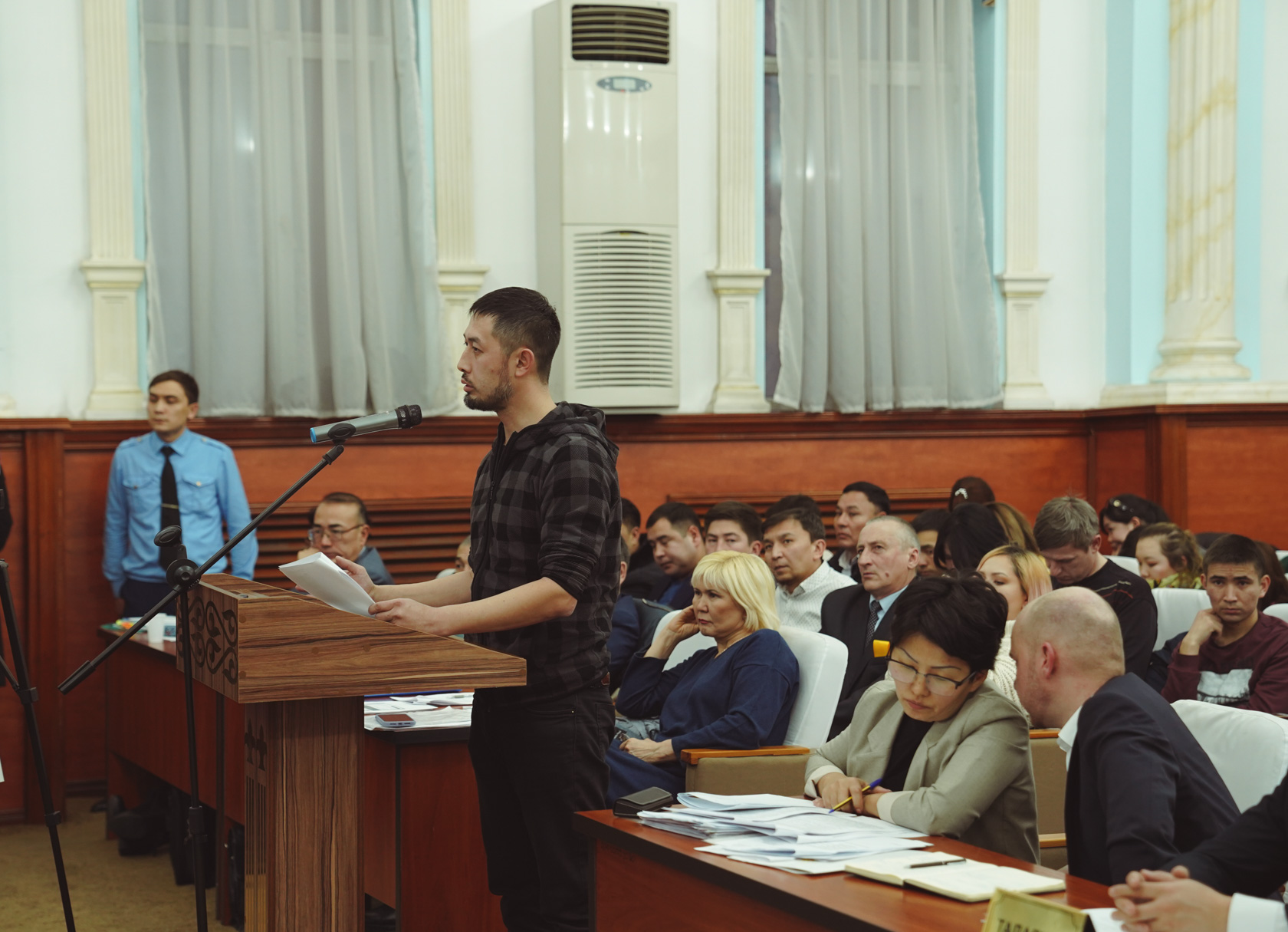 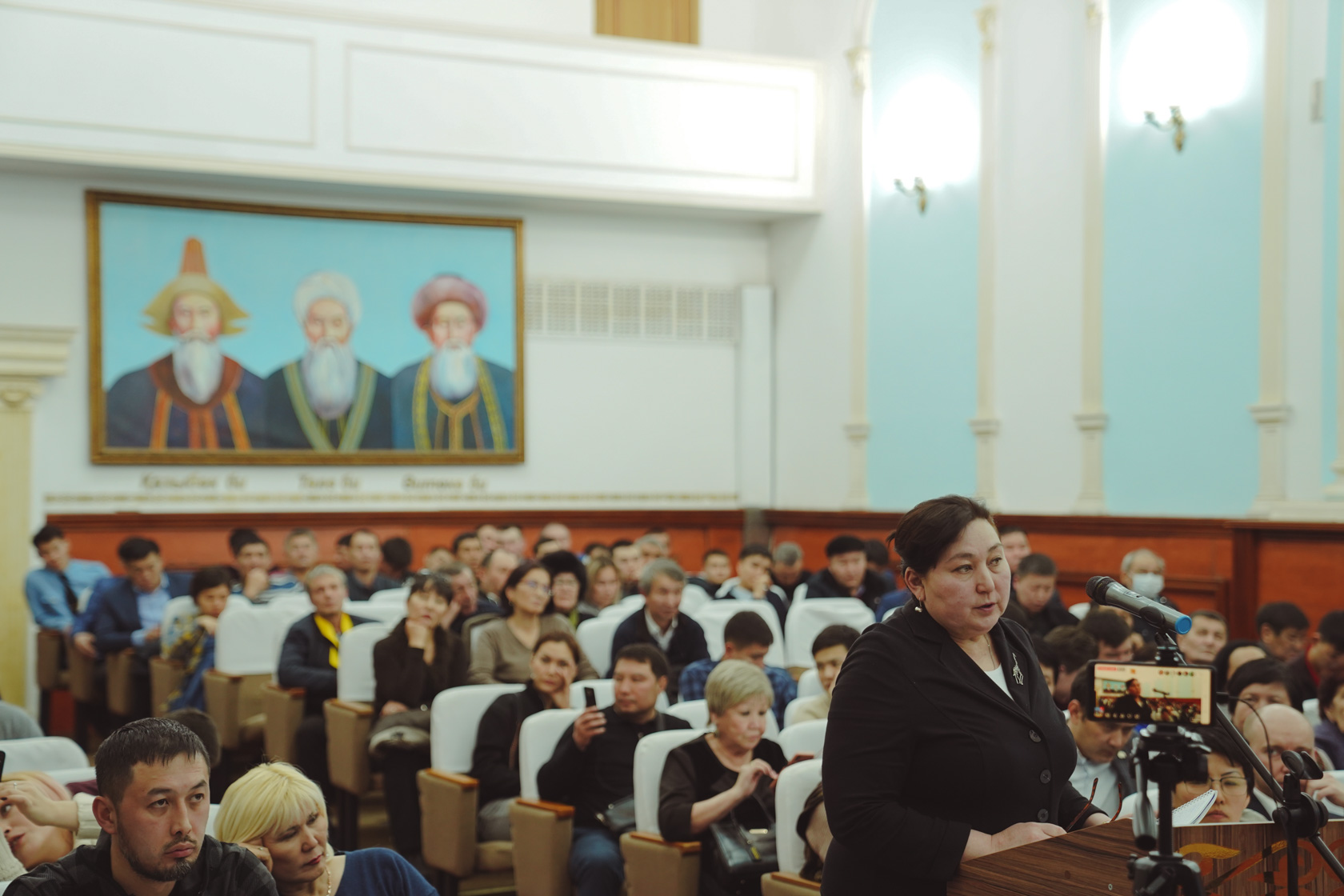 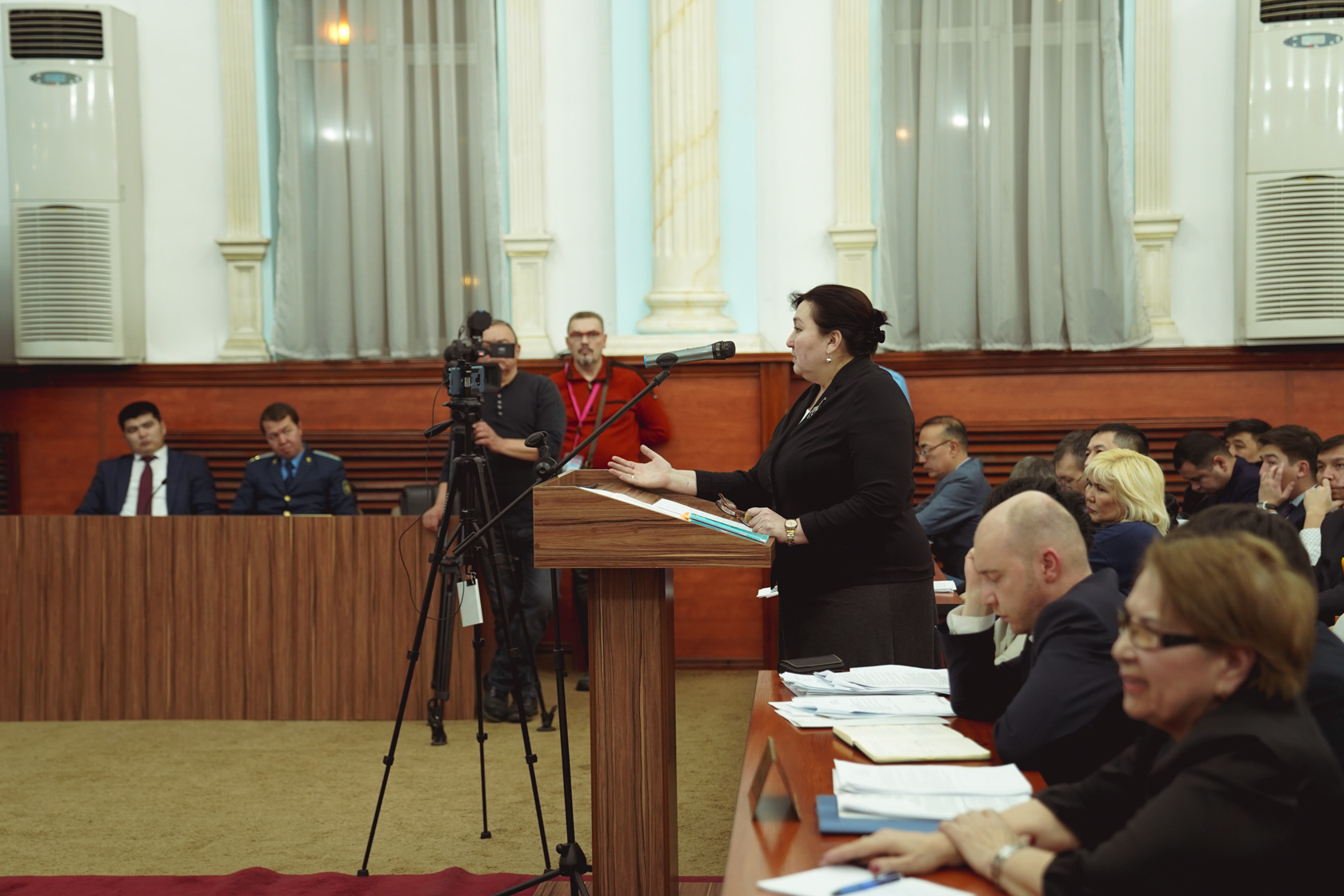 In conclusion, the prosecutor, who has remained silent throughout the process, recommends that the court leaves the previous decision unchanged. The judicial panel vacates the courtroom for discussion. 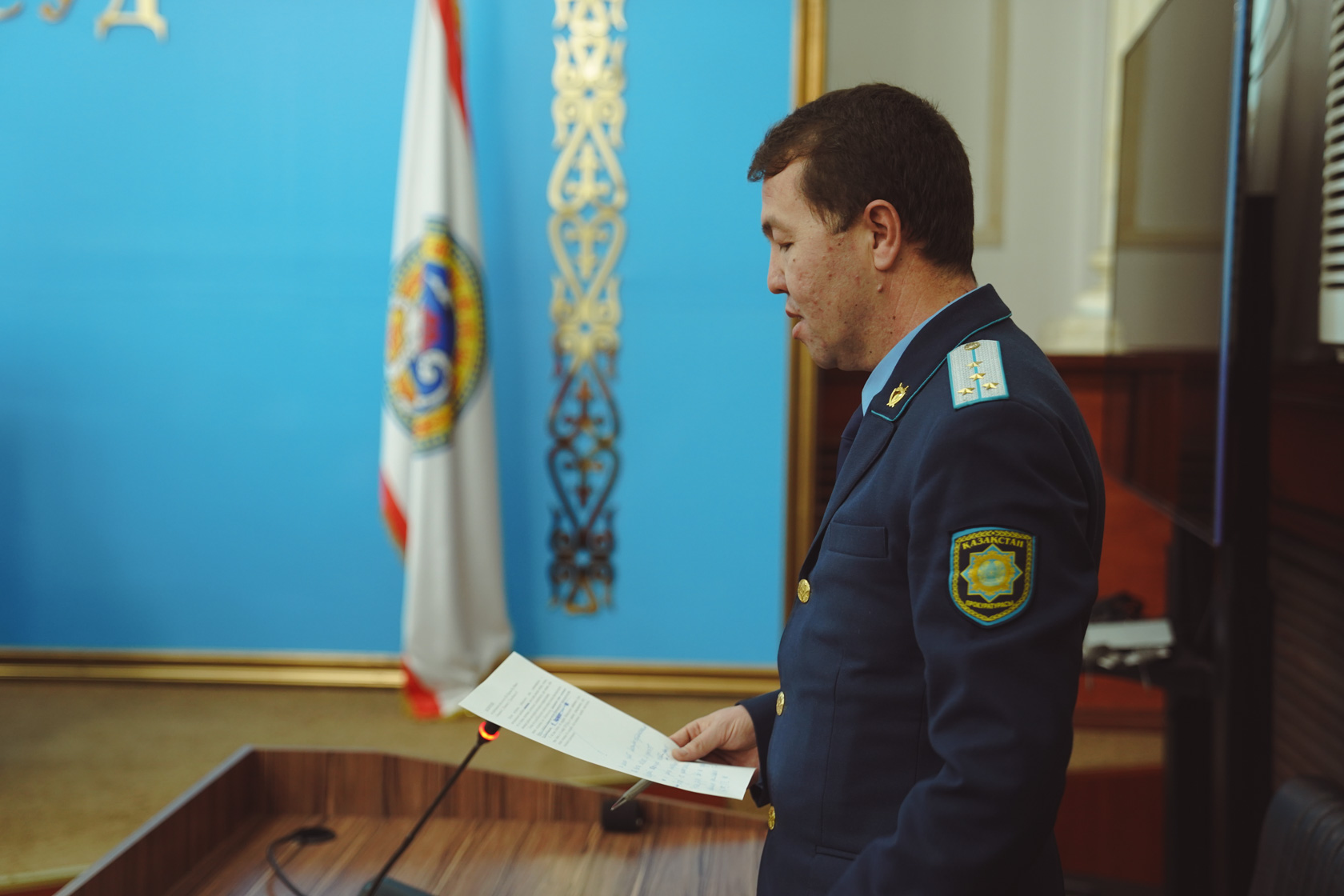 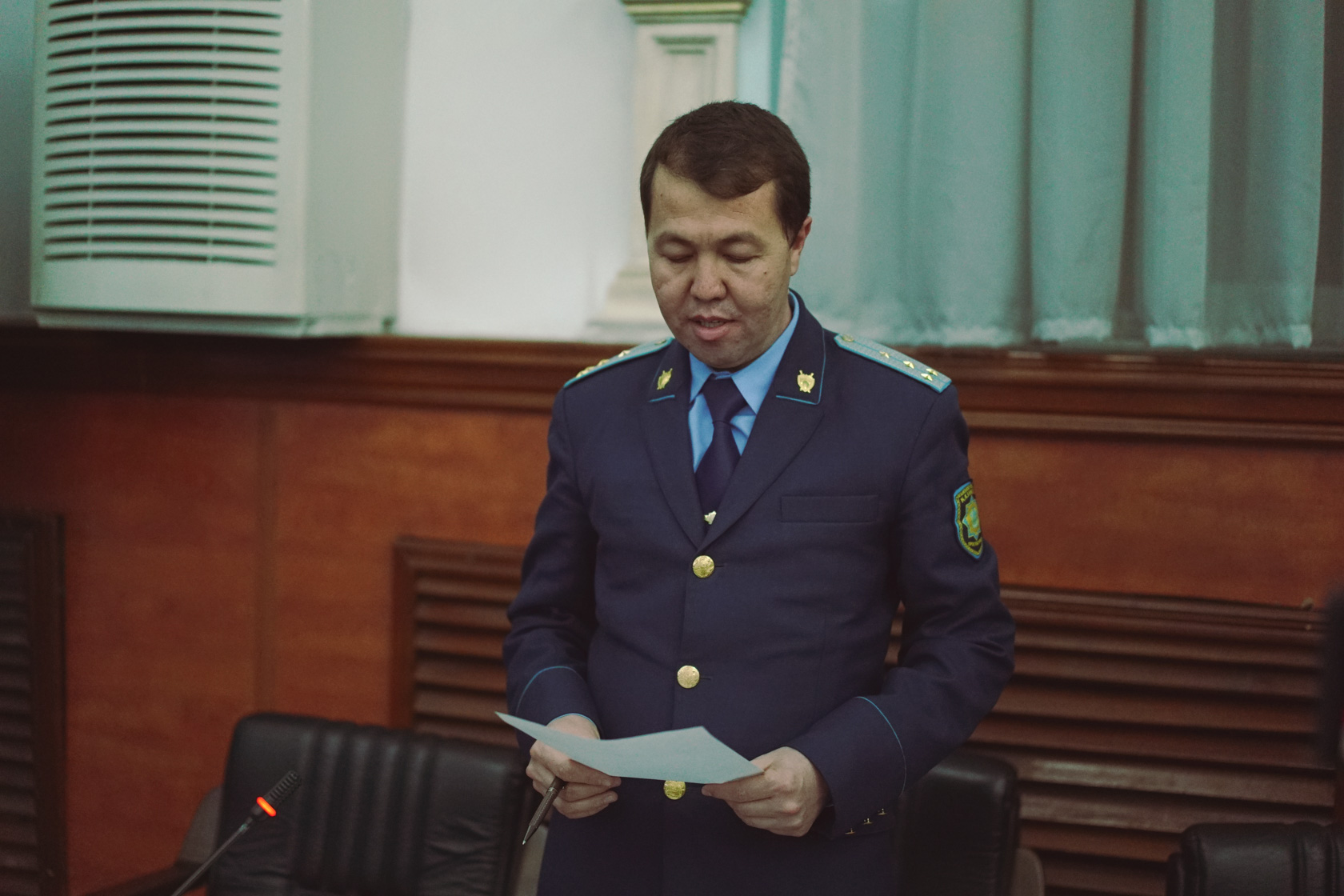 After a short meeting, the panel announces their decision to uphold the verdict of the Zhetysu district court. 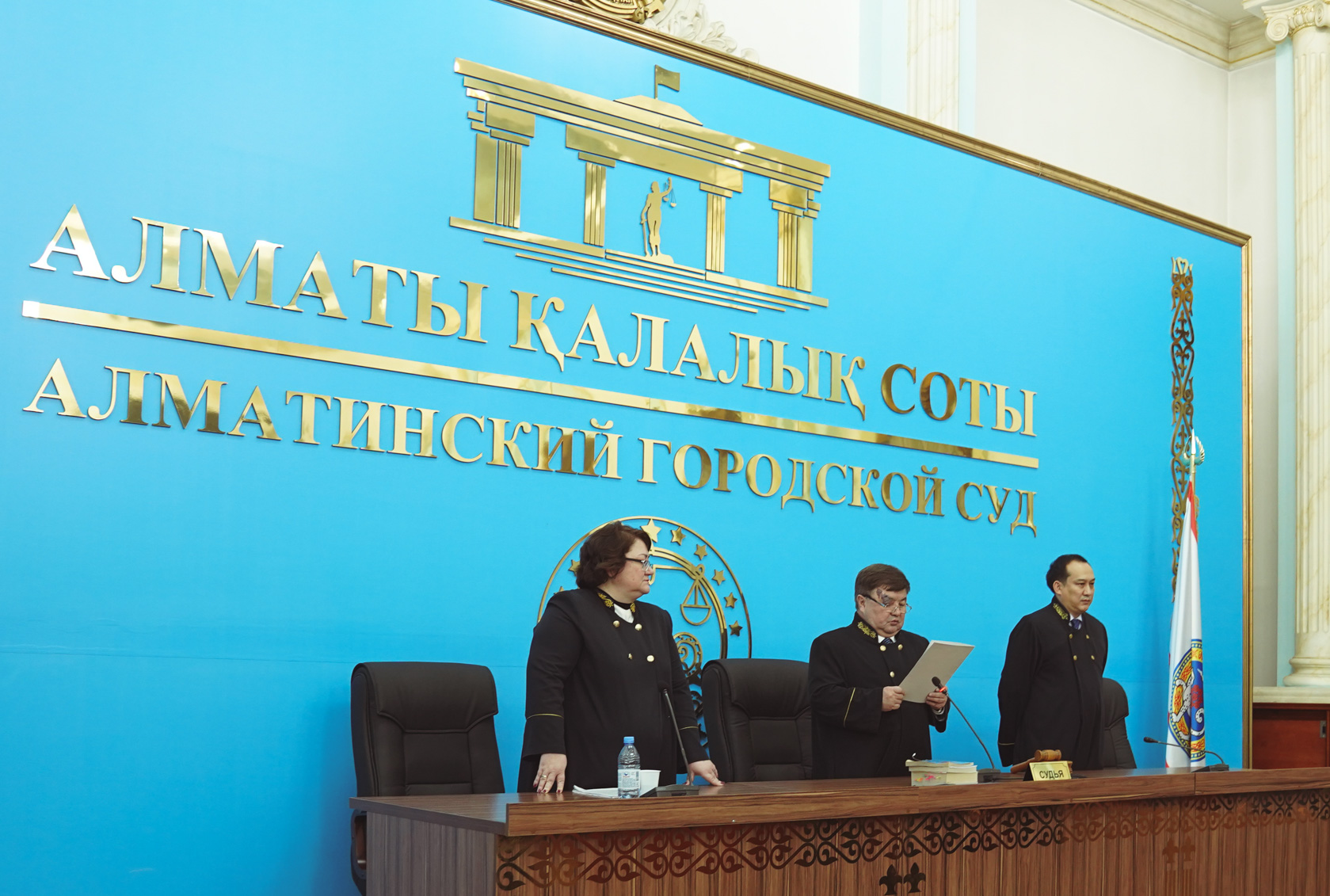 During the trial and after the sentencing, Alnur Ilyashev repeatedly stated that his goal is defeat, as this is the main condition that will allow him to bring this case to the UN Human Rights Committee. 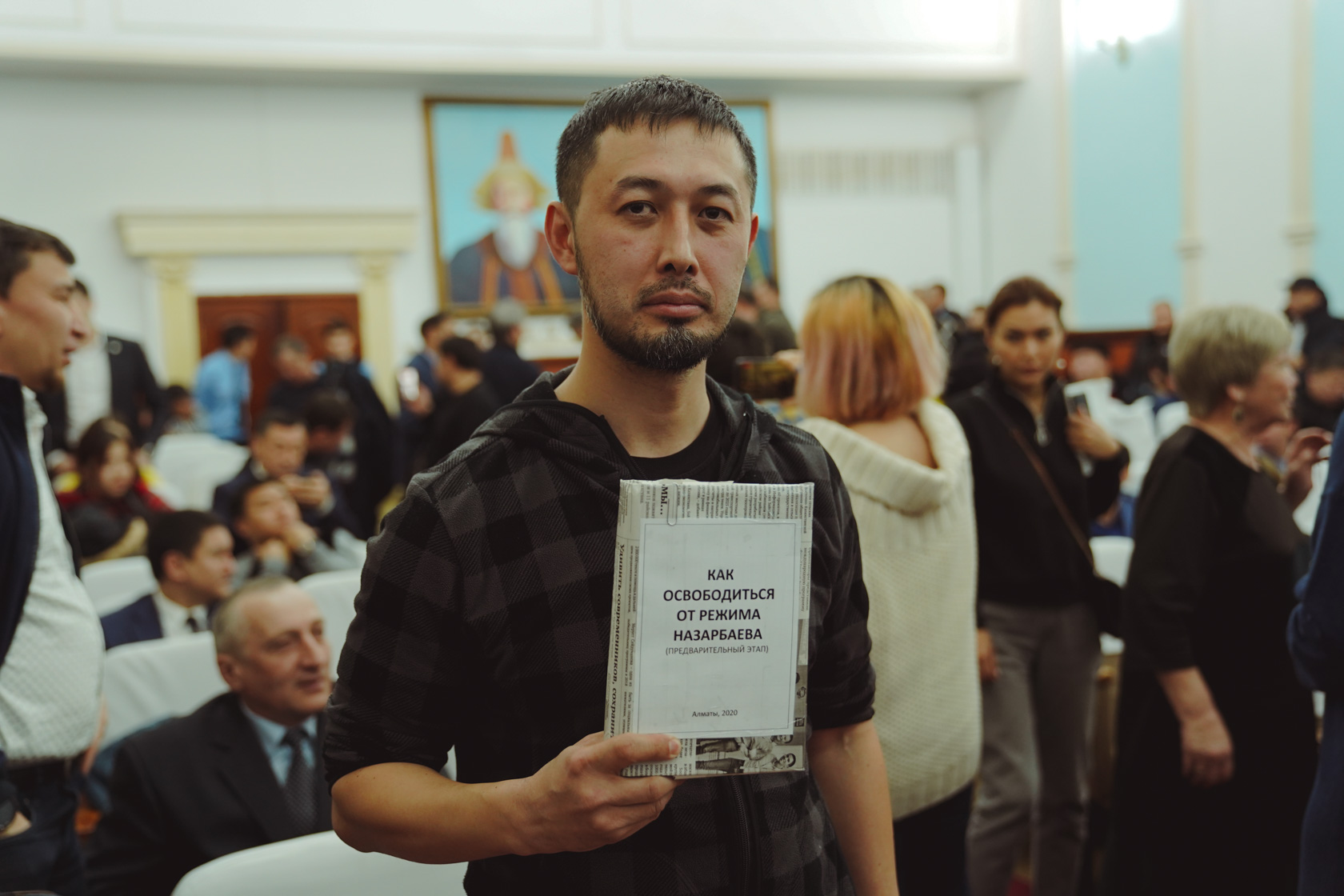 When members and supporters of Nur Otan exited the courtroom, dozens of activists who had been waiting outside the doors the entire time greeted them with the words “Shame!”, “Nur Otan – corruptors” and sang the band KINO’s song “We'll Take it from Here”. 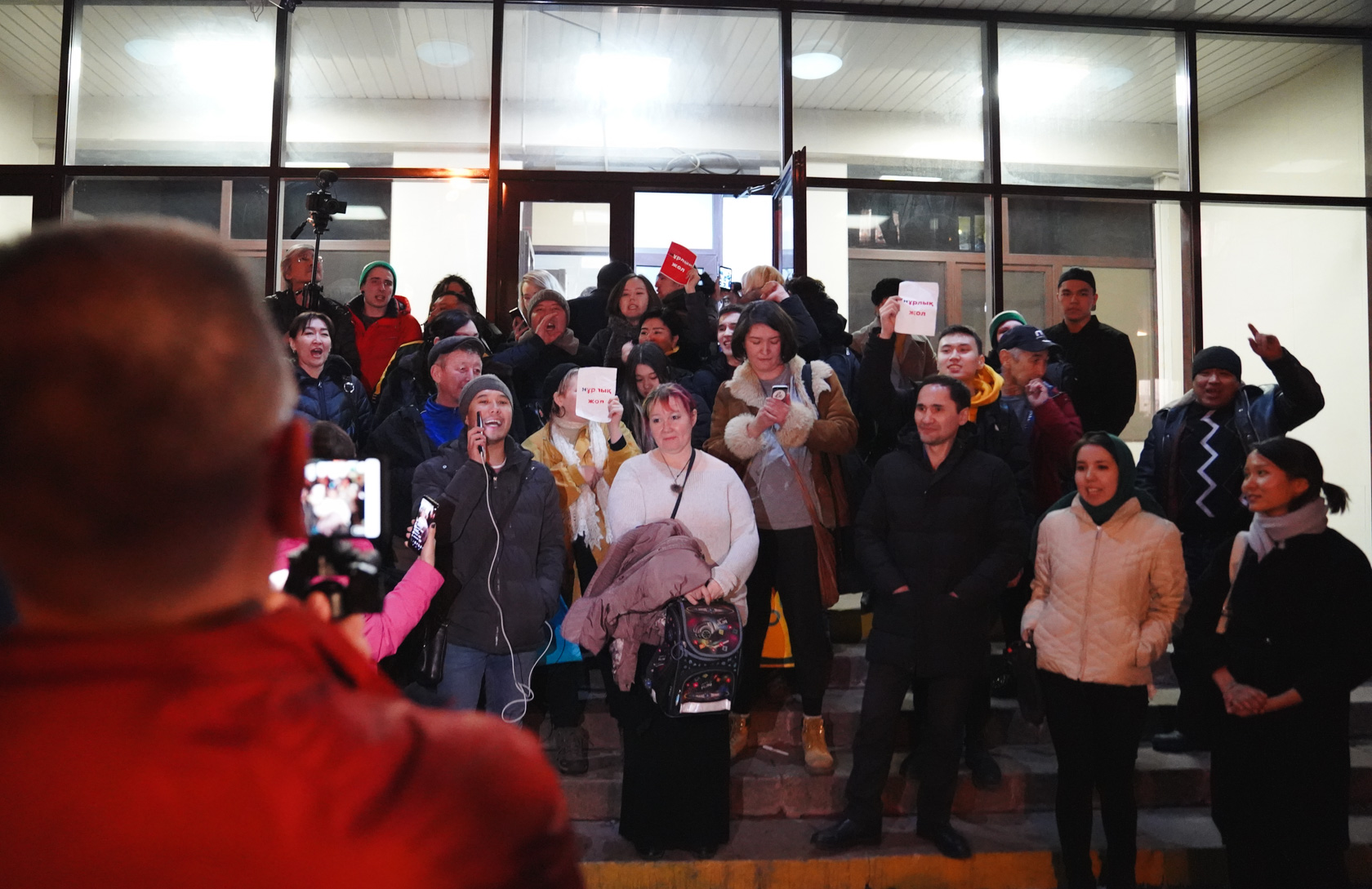 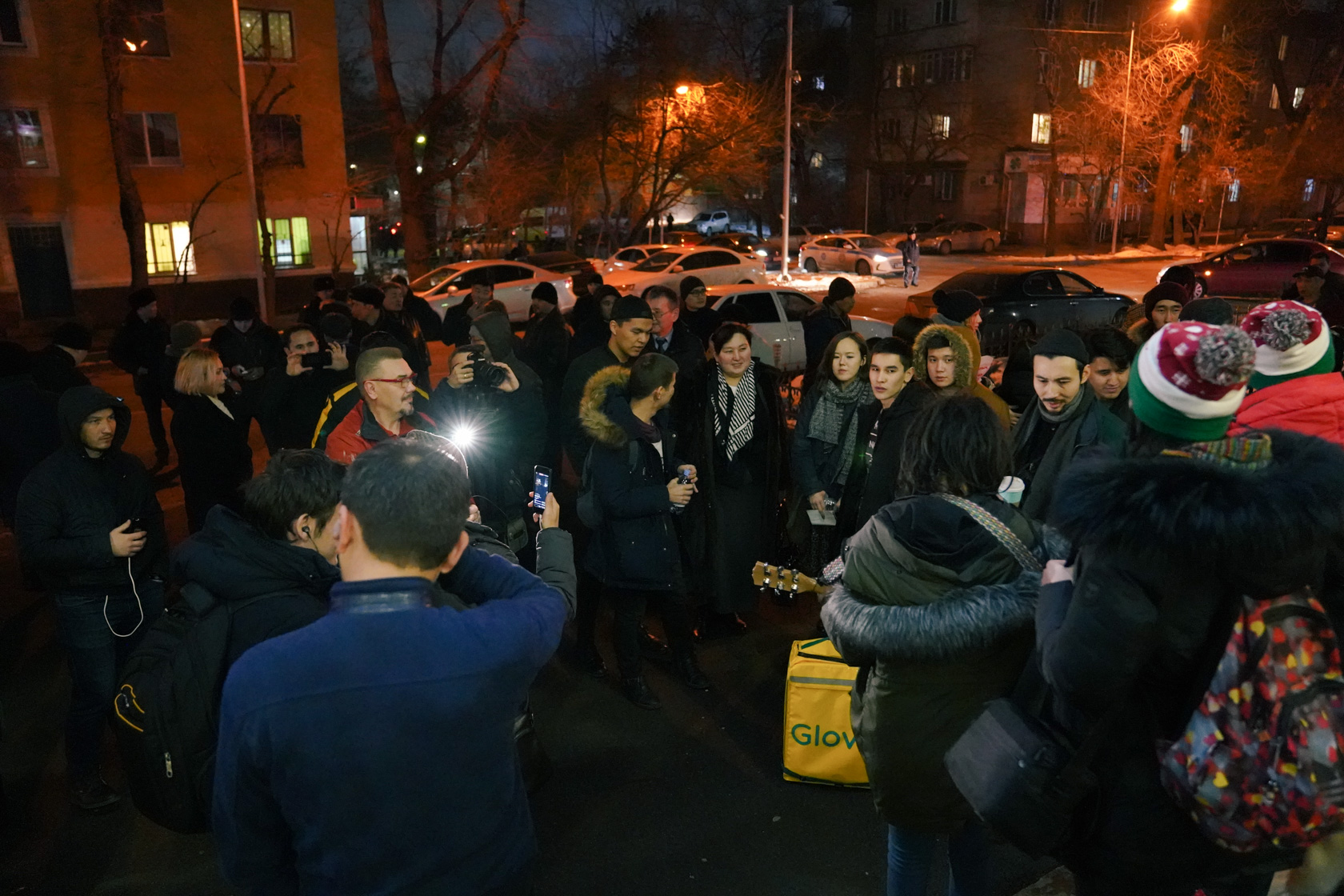 The trial depicted in illustrations by the artist Roman Zakharov is available here.